If you are new to badminton and do not know anything about the brands, then this is the place for you. We have got you covered. In this article, you will find the best brands for you, as a bigger, as well as the best products offered by the brand. The goal of this article is to help you make the best-informed decision when purchasing your first badminton racket. We understand that as a beginner, you do not want to spend bucket loads on equipment for a sport you might not take a complete liking to. However, if you do take a liking to it, you are still well equipped with a great racket that did not cost you an arm and a leg.

The Yonex brand has become a dominant corporate player in badminton since 1961. Along with sponsoring the entire All England Open Badminton Championships, Yonex is also a partner of the Badminton World Federation which organizes the World Championships. The Yonex brand is the most popular amongst many professionals. This can be a result of extensive research and development put into the making of their rackets and other products. Yonex has not only produced the world’s first aluminium badminton racket but also produced the world’s first ultra-light graphite racket and pioneered the isometric head design that is now widely used.

The badminton rackets of this series are capable of making a precise shot by storing and then releasing the energy. This is why this Yonex series is recognized as the most preferred. The use of the isometric frame equalizes the length of the string which enlarges the area of the sweet spot. This makes more consistent accuracy that is useful in off-centre shots, which makes the racket more forgiving and perfect for a beginner that lacks the proper techniques to control the shot. The racket is also lightweight which makes swinging and manoeuvering of the racket easier. Again, this is great for a beginner who lacks these skills.

This is a great middle-priced racket. However, it is aimed at more experienced players but this is not to say that a beginner could not use it, especially if the beginner would like to improve their skills at a quicker rate. The series is designed to aid in creating exceptional speed, powerful smashes, and exceptional control. These are some of the reasons as to why the series is so well thought-after. The overall construction is done in such a way that there is a reduction in the amount of vibration felt, making the rackets effortless to control. However, this may not be the best option for beginners as you will need a lot of practice to achieve perfect swings.

Babolat is the oldest company that specializes in racket sports. It was founded in Lyon, France in 1875 and can now be found in more than 100 countries, 20 000 sporting goods stores, and 20 000 partner clubs. This company offers a wide variety of products for badminton players that suit every style of play. Babolat sponsors great tennis players like Rafael Nadal and Andy Roddick, as well as great badminton players too.

Designed with great attention to detail, the rackets are made to be lightweight. This making them easy to swing through the air without having to exercise much effort. Perfect for beginners, the string tension of the rackets are strung in such a way that a huge sweet spot is created. Because of this, the racket is more forgiving as off-target shots can still be relatively precise and have ample power. Constructed to be a head-heavy racket, the smashing is where the racket excels. Being a thin profile racket, it seems to fly through the air at a fast pace which aids in the smash.

Sponsors to the Malaysian National Team and the Danish National Team, the Victor brand is well-recognized by the badminton world. This Taiwanese manufacturer provides quality products that are approved by the Badminton World Federation. The company was founded in 1968 and two years of producing badminton shuttlecocks, they topped the sales in Taiwan. Prided with their vast variety of rackets, the company helps in offering products to players that are either advanced, complete beginners, or anything in-between.

This racket is lightweight and has an even balance, holding both the qualities that make the racket perfect for beginners. Offering a lightweight racket helps defence and shots around the net to be quicker. This is great for players that have not yet learned these skills. The even-balance racket offers the advantages of both head-heavy and head-light rackets, giving you the power and enough control and manoeuvrability. The series is aimed at anyone that likes to provide powerful shots, and let’s be honest, who does not shots that make it hard for your opponent to return. Making this an even greater purchase, the Victor Auraspeed series is seen as the most innovative and leading performance range in badminton. Why not start learning your way around badminton with one of the best performance rackets in the game?

Li-Ning is the Chinese leader athletic apparel, footwear, and sports equipment. The extraordinary design and technology has led to them becoming a great provider of badminton equipment. There is a need to strive for innovation that sets them apart from the rest. Li-Ning sponsors the number 6 ranked female singles player in the world, Pusarla Venkata Sindhu. They are well known for their robust frame design which offers great control to the player.

Overall, this range allows you to generate maximum power. This is a very useful property for beginners as this skill may not have been learned yet. If this is the case, the racket therein gives an advantage to the beginner player and provides shots that are powerful enough to cause difficulty for the opposition to return. The use of head-heavy balance helps in providing powerful shots but can be quite challenging when trying to swing the racket. This can be especially difficult for beginners that do not have the knowledge to know how to control the drawbacks of a head-heavy racket.

The technology used in the Aeronaut Series helps in creating a design that is perfect for players that are for great control in their badminton racket without any compromise in the power of the racket. Not only will this allow a beginner player to provide powerful shots but will be forgiving enough to give the player great control. Along with this, the racket is designed with a unique air stream channel integrated into the racket’s head making the air stream channel minimize the air resistance which results in a faster shuttlecock speed. The racket provides a more stable and more precise placement without much skill needed, therein making it a great racket for someone that is yet to learn these skills.

This racket was specifically designed to provide a fast reaction. It features an innovative trapezoidal frame construction. This energizes the player with extra strong swing speeds. Added to this, it is designed to provide the player with a balance between speed and stability, better accommodating a beginner player that does not yet know how to balance speed and stability themselves. The use of carbon materials aids in making an ultra-strong racket. With this, it avoids frame deformation and twisting while allowing an accurate attack point to be formed, making the racket have a forgiving feature to it.

Slightly controversial entry on this list, I admit, but nothing beats Senston on price/quality relationship.
If you are looking for unrivalled performance, then this racket is for you. Not only is a great budget option, but the N80 Graphite also cuts through the air without much resistance leaving you to make swift moves with ease. This makes this racket perfect for the absolute beginner as well as intermediate players. The use of the lightweight racket helps you play the game longer while not having to deal with the shoulder pain caused by heavier rackets. Designed with carbon fibre materials aids in enhancing the strength of the racket, and reduces the risk of frame deformation. Stability is a major advantage of the racket which helps in achieving high-precision control performance. The improved aerodynamics also helps in increasing the velocity of shots while still being a pretty forgiving racket, making it perfect for the player that still lacks the proper techniques. 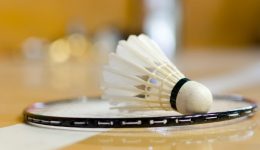 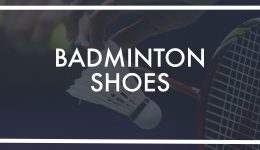 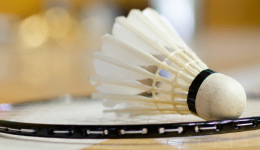 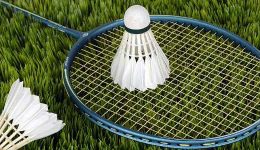 What Qualification Do You Need to Become a Badminton Umpire?

What Badminton Racket Size Do You Need?